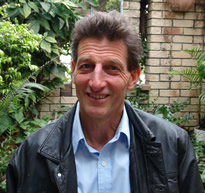 The creator of the [Motorists Party] believes his party’s message has tapped into an electorate looking for an alternative.

Queensland’s newest politico has a fairly simple message – no tolls, no asset sales.

Jeffrey Hodges has spent the past two and a half years attempting to get his [Motorists Party] off the ground, but now appears to have found his moment.

After failing to get the required 500 members to register a party 18 months ago, Mr Hodges said the party now has more than 2000 members and is growing daily.

But he believes his party’s message – no asset sales, no toll roads and no political donations – has tapped into an electorate with a deep-rooted cynicism of the political process, looking for an alternative.

“It has been really difficult to go into this, because one of the things I’ve found is people really almost kind of spit at you when you say ‘oh, I’m going to go into politics’ and it’s been really challenging. Because they don’t believe someone can be honest and have integrity and want to move into politics. But if good people do nothing, then evil flourishes. I believe I am a good person and I want to stand up for honesty and integrity and try to bring into the political system some of the statesmanship we used to have in Australian politics, but is no longer there.”

Which is why his party will accept no donations.

“We believe that the concept of political donations is basically a corrupting process,” he said.

“Political parties should be funded by the government based on the number of votes that that political party gets at the election.”

Mr Hodges, who lives in the Sunshine Coast hinterland, plans to stand for the seat of Waterford, south of Brisbane, which takes in Loganlea and part of Beenleigh. Currently held by the LNP’s Michael Latter by a one per cent margin, Mr Hodges said he knows he faces a battle, but believes voters “who are on an average wage, travelling the toll roads every day”, will appreciate the choice.

Spruiking the message that “essential services” belong under public ownership and stable economy can be built by “making the wealthy pay their fair share” Mr Hodges hopes to have candidates standing in and around Brisbane, where he feels dissent against asset sales is at its strongest.

But with no funds and no desire to accept any, Mr Hodges said he will be relying on a swell of “grassroots” support.

“I have been on my bike riding around the area I will be standing in, the Waterford electorate and handing out fliers, just getting the message out there standing on the road side and talking to people and obviously using social media.

“The only reason they voted for the Palmer United Party is because they were so disgusted with the antics of the Labor and the Liberal Party. So I figure, if they are going to vote for someone like Clive Palmer, then surely someone who has a little bit of honesty and integrity is going to get a lot more votes than Clive Palmer.”