Tolls Should Have Ended Last Week 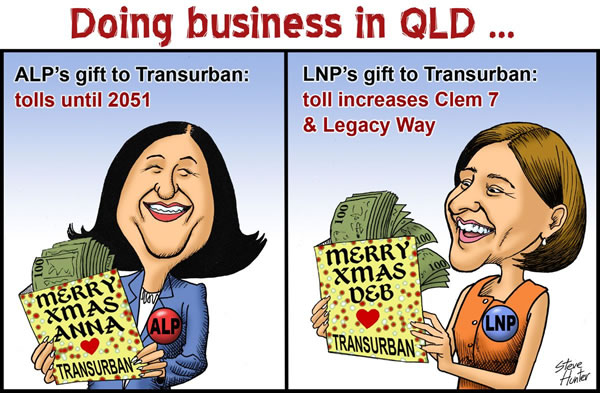 Thirty years ago the Logan Motorway was opened with the promise by then Premier Bjelke-Petersen and Main Roads Minister Hinze that the tolls would end in 2018.

After 30 years of paying exorbitant tolls for a road that only cost $140 million – and which is raking in over $400 million EACH YEAR (for Transurban, a private company, not government) – motorists would have expected an early Christmas present this year.

But it is not to be – thanks to Anna and the ALP.

In late 2016, without any public consultation, and little media attention, Anna Palszczuk broke Sir Joh’s agreement with the people and condemned Qld motorists to paying tolls on the Logan and Gateway Motorways until 2051.

Transurban gives generous political ‘donations’ to both the ALP and LNP, so of course both political parties look after them…. instead of looking after Queensland motorists.

Can anyone tell me – what is the difference between a political ‘donation’ and a bribe?

Merry Christmas to Queensland motorists from Anna and Deb !

Please remember this at the next election!

Please continue to support us and pass on our message to everyone you know.